That was 5 years ago and it was my first shareholder meeting.

The shareholder meeting was held at the World of Coca-Cola and after the meeting, pre-registered shareholders and their invited guests toured the museum.

I met up with Ted Ryan and Jamal Booker with the Coca-Cola Archives.  They were the stewards of the vast collection of company artifacts.  In fact the World of Coca-Cola was custom-built to share the 130-year history of its iconic heritage with the public. 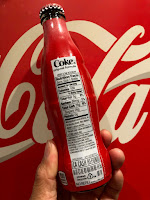 I also took pictures with the 7-foot-tall Polar Bear mascot and lounged on the American Idol's couch during the self-guided tour.

At the end of the visit, each guest received a special event gift for shareholders - a commemorative Coca-Cola bottle.

The 8oz wrapped glass bottle features the updated disc design and the slogan "TASTE THE FEELING."  On the heel of the bottle, the text reads: "2016 Shareowner Day April 27, 2016 World of Coca-Cola."   The backside has the nutritional facts label for Coke® original formula.  No UPC. GAN 2014-02043.

Oh and I also met up with another fellow shareholder who attended the meeting - Reverend Jessie Jackson. He autographed my copy of the company 10K report.
1 comment:
Email ThisBlogThis!Share to TwitterShare to FacebookShare to Pinterest
Labels: 2010s, bottle, glass 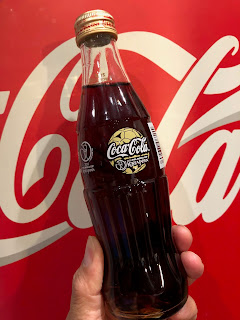 2002 FIFA World Cup games were hosted by South Korea and Japan.  Coca-Cola Japan released a number of commemorative packages including this 250ml glass bottle with a twist-off metal cap.  Graphics include two official FIFA World Cup logos: a white logo by itself and the other in yellow and white as part of a larger soccer ball design along with the Coca-Cola trademark.
UPC: 49670721. 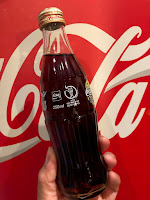 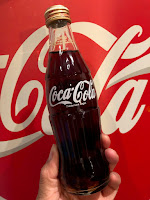 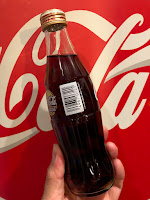 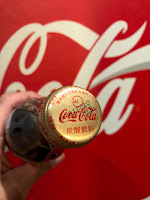 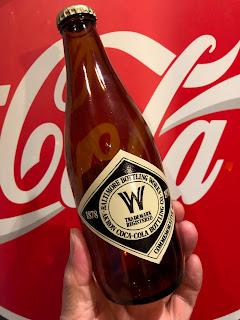 Baltimore Bottling Works aka Akron Coca-Cola Bottling Co. celebrated its 100th anniversary in 1978.  A commemorative bottle was released for the occasion.  It was a straight sided amber bottle capped empty and came with a hang tag. 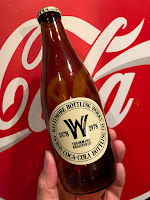 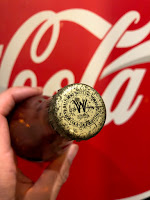 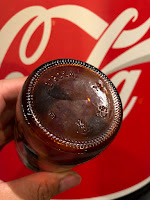 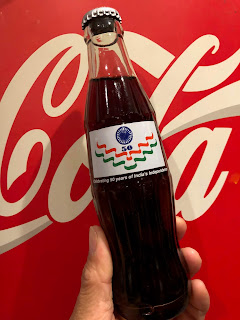 India became an independent nation after 200 years of British rule on August 15, 1947. Three years later, Coca-Cola's first bottling operation in India began at Pure Drinks, Ltd. in New Delhi. Coca-Cola continued its expansion in India for 30 years. By 1977, 450 million bottles of Coke were sold per year by 200,000 retail outlets and they were produced by 6,000 workers at the 22 bottling plants. An estimated 60 million returnable glass bottles were in circulation.

However, India's Foreign Exchange Act in 1977 forced The Coca-Cola Company to exit the 600 million people market until the India government welcomed foreign investments again in 1991. 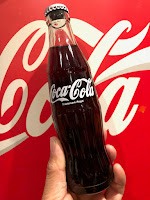 On October 24, 1993, Coca-Cola's inaugural bottling operation began in Agra.  By then India's population had grown to over 900 million.  By 2013, Coca-Cola had invested over $2 billion and built 58 bottling plants to serve the second most populous nation on earth.

Four years later, Coca-Cola produced a commemorative bottle to celebrate India's golden jubilee. The 200ml glass bottle features a stylized flag of India with the number 50 in the middle. Beneath it the caption reads "Celebrating 50 years of India's Independence." The backside shows Coca-Cola Trademark Regd.  Between the graphic and the trademark is a square Coke wave device and 200ml COMMEMORATIVE BOTTLE. A cardboard presentation box also came with the bottle.

The white ACL bottle has Happy to be here! text along with three bursts of fireworks over Coca-Cola trademark and INDIA 1993 COMMEMORATIVE BOTTLE in the main graphic panel.  The backside has BOTTLE FOR BEVERAGE ONLY 200 ml.  The bottle is full with a white crown cap.

The display box is lined with a mirror inside and the removable clear cover has Coca-Cola in red and Commemorative Bottle India 1993 in gold.

This was likely one of the highest prices ever paid for a Coca-Cola commemorative bottle on eBay if not the highest in recent memory.
No comments:
Email ThisBlogThis!Share to TwitterShare to FacebookShare to Pinterest
Labels: 1990s, bottle, glass

A Toast to Disney and Ovitz from Coca-Cola bottle 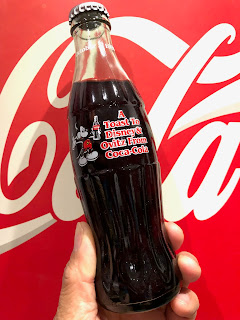 Michael Ovitz became the President of The Walt Disney Company in October 1995. The Coca-Cola Company prepared a special bottle featuring Mickey Mouse holding a bottle of Coca-Cola. The caption reads "A Toast To Disney & Ovtiz From Coca-Cola"  in red. October 3, 1995 in white text appears on the neck of the bottle.

Backside of the bottle has the Coca-Cola CLASSIC trademark. No UPC. No GAN.

However, the bottle was never released and reportedly most of the bottles were destroyed.

In the 1999 Ad Age Advertising Century, Michael Ovitz was No. 89 of the Top 100 people. Co-founder of Creative Artists Agency (CAA) Ovitz signed The Coca-Cola Company as a customer in 1991 and in 1993 launched the Always Coca-Cola campaign with the CG-animated Polar Bear commercials. 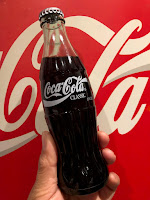 After 30 Years at CAA, Michael Ortiz left to join Disney as President but he only lasted 15 months.

The Coca-Cola Company has had a long history with The Walt Disney Company. When Disneyland opened in Anaheim, California in 1955, Coca-Cola Refreshment Corner at the end of Main Street was one of the inaugural restaurants. The two companies continued their partnership for over 6 decades as Coca-Cola being the beverage provider for Disney's theme parks and resorts worldwide with the exception of the Shanghai location.
No comments:
Email ThisBlogThis!Share to TwitterShare to FacebookShare to Pinterest
Labels: 1990s, bottle, disney, glass 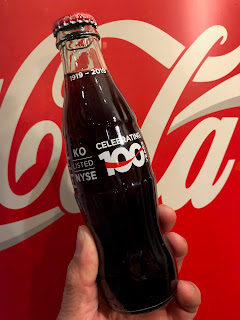 On August 16, 1919, The Coca-Cola Company made its initial public offering on the New York Stock Exchange at $40 a share.   The stock debut under the symbol: KO on NYSE. 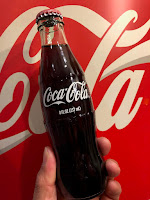 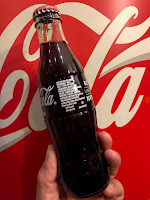 In celebrating the 100th anniversary of NYSE:KO, the World of Coca-Cola Atlanta gave away this special bottle on Sunday, December 8, 2019 and the admission to the museum was also free.

The 8oz glass bottle has 1919-2019 on the neck.  KO LISTED NYSE and CELEBRATING 100 YEARS graphics appear at the middle.   All the letterings are in white except for the "Wave" in red over the 100. 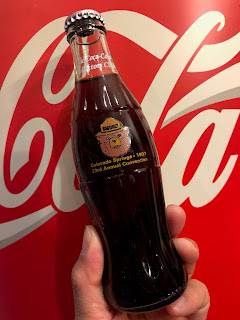 The Coca-Cola Collectors Club held its 23rd annual convention at the Sheraton Hotel in Colorado Springs, Colorado from July 30 - August 2, 1997.

The convention bottle is a 8oz glass bottle featuring Smokey the Bear.  Underneath Smokey is lettering in orange: Colorado Springs - 1997 23rd Annual Convention. The Coca-Cola Collectors Club lettering in white appears on the neck. UPC: 491820. No GAN. 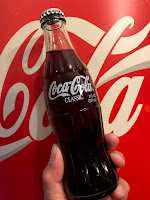 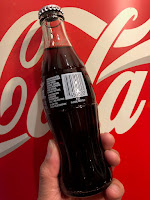