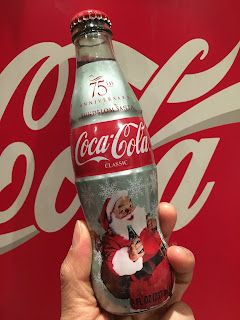 In 1931, artist Haddon Sundblom began creating a series of print ads with Santa Claus for The Coca-Cola Company. Over the years, Sundblom's Coca-Cola Santa have also appeared on glass, cans, bottles, cartons, trays and toys worldwide.  In 2006, a limited edition Christmas bottle was released to commemorate the 75th anniversary of the Sundblom Santa featuring the Santa holding a bottle in his right hand and a large sack of gifts over his left shoulder.  The 8oz wrapped glass bottles also came with a special 6-pack cardboard carrier.  These were available in supermarkets and grocery stores.  UPC 0-491820-2.  GAN 2006-4503. 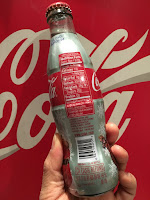