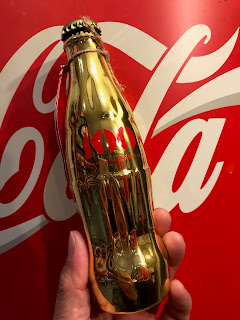 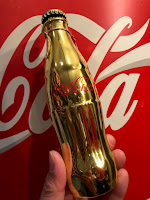 The Coca-Cola Company celebrated the 100th anniversary of the Contour Bottle in 2015.  Three different colored glass bottles were made for collectors: Red, Gold and Silver.

Each bottle is hand numbered at the bottom with a limited edition of 2500.  The bottle is empty but capped and comes with a bottle-shaped hang tag tied to the neck.

This gold bottle features the stylized 100 logo with the contour shaped bottles in each of the digits and the text 100 Years of the Coca-Cola bottle beneath it in red.

There were multiple editions released for this bottle.

Another design has the 00 stylized with 12 contour bottles in a circular pattern around one bottle in the center.

It is numbered LIMITED EDITION 1 of 2500 on the base plate of the bottle.

No UPC and no GAN. 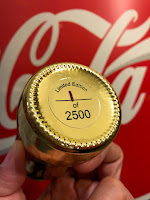 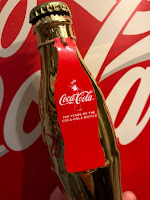